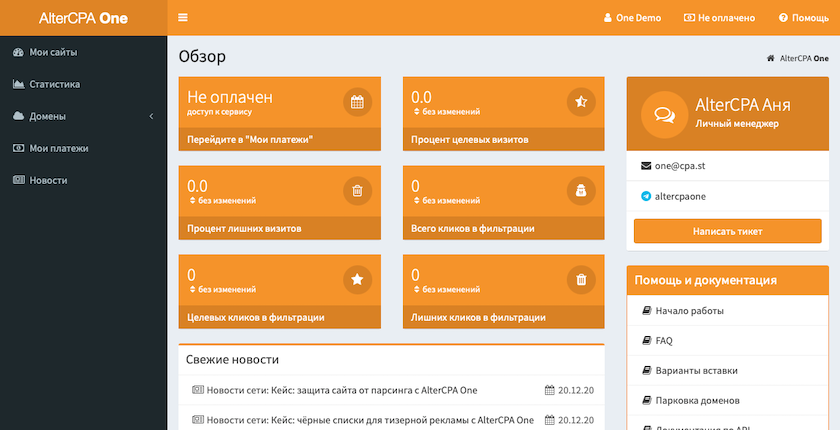 I’m eighteen already! 🙀 A stable AlterCPA version 18 was released. And the most important innovation in it, of course, was the discarded number three in the version number 😹 And the rest of the fifty improvements – so, for an amateur. We will share the news with these amateurs.

♻️ Laziness turned out to be the engine of progress – we now have an automatic update system. If you have recently configured the server, then it is already enabled and works by default. For oldies, everything can be configured according to the instructions from your personal account. You will always have a fresh version of the system and a fresh license, which is especially important for those who have not yet switched to lifetime licensing.

🤖 In small steps we are slowly adding machine learning and artificial intelligence mechanisms to AlterCPA. In this version, gender statistics for offers is back in operation – the system again learned to recognize the gender of the buyer by his name, this time not only in Russian. Of course, the accuracy is not perfect, because our buyers cannot write their own name without errors, but it is enough to set the targeting.

💔 Facebook pretty much fucked the entire industry this fall. We survived as best we could. Not all survived. But the survivors were able to use the server pixel of the FB and not fire up the real addresses of their sites. The price to pay for this convenience is the long and painful retrieval of the API token. On large volumes, the hemorrhoid process, is it worth the candle – it’s up to you.

💩 Everyone’s favorite FB showed off a piece of shit – it sued a large sum of money from one cloaking service. We did not like this trend, so we have to remove all cloaking tools from AlterCPA. But in order not to upset our users, we are adding a new set of tools – traffic filtering.

😻 In addition to this, we are releasing traffic filtering tools as a separate service – AlterCPA One. This cloud service is provided by subscription for a modest monthly fee. You don’t need to sell your secretary’s kidney and buy the full AlterCPA Pro to use filtering mechanisms.

🛠 Several useful little things have been added to the new traffic filtering tools:

☎️ Not so long ago, we told you that hidden numbers in a call center are completely stupid. We gave up 😢 Now, in the command settings in the CC, it is possible to hide phone numbers entirely or by leaving only the call button.

📊 We have completed development of the accounting of the cost of orders. You can specify the costs of goods and additional services when working with an order and in the future calculate the income on product traffic, depending on the buyout. The net cost can be set both for offers as a whole and in the settings of warehouse goods. Delivery analytics have added cost, revenue, and profit information.

😉 Of course, there are a few more pleasant things:

🦄 Of course, these are far from all the modifications of AlterCPA Pro 18. The most serious work was done under the hood of the system, unnoticed by users. We have completely redesigned storage and optimization mechanisms for large tables. For the most heavily loaded networks, problems disappeared, in which at midnight the network could turn into a pumpkin for a couple of minutes. No more time limits for click lifetime. Do you want forever? Let it be forever, why not!